“You’re going to Hollywood!” announce the judges as they hand over the golden ticket. I’m thrilled every time. Since I started watching American Idol in 2006, I have been totally enamored with the auditions. Thankfully, the producers no longer air so many disparaging clips of the amateurs. Tryouts feature aspiring singers and a few of their personal stories.  Many vow to improve the quality of life for their families should they succeed. Loved ones scream, cry, and join in group hugs when singers emerge with their ticket to the next round. Dreams are contagious.

I first learned of golden tickets in Roald Dahl’s book Charlie and the Chocolate Factory, published in 1964. In the fictional story, five golden tickets are hidden in Wonka candy bars. The five “lucky finders” will participate in a complete tour of the newly re-opened chocolate factory. Those children will learn all the “secrets and the magic” of the factory.  Besides that, at the conclusion of the tour, each of the five children will receive “enough chocolates and candies to last them the rest of their lives.”

Not a reward in itself, a golden ticket is the admission to a world of possibility, opportunities one has dreamed of. Golden tickets don’t appear out of nowhere.  Receiving one takes some kind of prior investment. For the Idol hopefuls, it has been years, often decades of following every possible avenue for a break in the music industry.  I’m more suited to the process required for a Wonka ticket: devour chocolate bars until one finds the ticket.

Unknowingly, I began preparations for a golden ticket in 2017. We decided to buy a boat to use on the nearby St. Lawrence River.  Having no water access, we began the search for a boat slip. Of course we wanted a location within reason.  We had no luck, every local marina was filled or out of commission due to high water.  We postponed the boat purchase for another year.

Seven-tenths of a mile from our door sat a well-maintained marina, once named the Blue Heron, now known as Boldt Landing. With access to the American channel of the St. Lawrence River, it holds about 30 small boats.  A neighbor told us to contact Jill at the Thousand Islands Bridge Authority. She informed us that all slips were occupied and seldom came open for lease. However, she put us on a waiting list. I made monthly calls to check on our status.

As an advocate of the law of attraction, I made regular visits to the marina as if I owned one of the boats.  I strolled out on the docks, and stood by a slip that seemed unoccupied.

If anyone pulled in or out, I gave a friendly greeting, and initiated conversation. The sign said, Authorized Persons Only. I would be soon.  I was told by the captain of the Fairyland Island shuttle that slip-owners were billed in January. He paid promptly to keep his coveted dock. So beginning January 9 of this year, I resumed regular calls to Jill. We had risen to the top of a list of eight. And in keeping with the law of attraction, we ordered the boat, acting as if we already had a slip.

On March 16, Paul and I were involved in a stirring game of Bingo with our granddaughters. Our phone rang. I didn’t get to the phone. Caller ID showed TIBA.  Paul went crazy. We halted the game and I returned the call. Jill answered.

“Yes, I thought I would call you for a change,” she neutrally replied.

Hopefully I asked,  “Do you have news for us?”

Adrenaline blocked further comprehension, something about paperwork. I told her to hold everything. I will come in person.

I hung up and reacted as if I had been sent to Hollywood. I whooped and hollered.  I jumped up and down as best I could. My heart pounded.  The two grand girls looked very puzzled. Paul explained that I had just received the most wonderful news.  Within days I had in my possession a golden ticket. We now have access to all the “secrets and magic” of the Thousand Islands.

I remember occasions of elation with a dream realized: making the squad, college acceptance, and of course, the marriage proposal.  In the career years, jubilation came with a job offer, a promotion, or a professional accomplishment. Entering retirement, I had simple aspirations, be productive and stay healthy. I had underestimated seniority. Surprisingly, I found that no matter one’s age, new ventures offer golden tickets to new dreams. 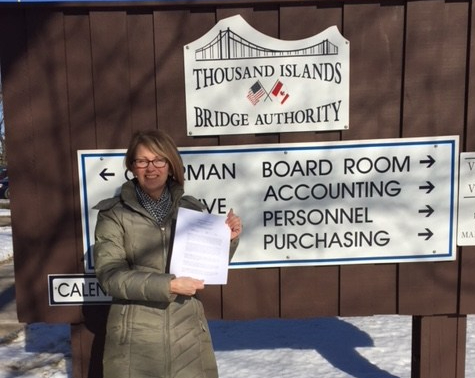