When we moved to Wellesley Island we made our first order of business setting up a desirable destination for our granddaughters at our place. The second bedroom, fitted with vintage twin beds from Reed’s old bedroom is their domain. I stocked it with books, pajamas, robes, doll babies, and games. Art and craft supplies, which they are crazy for, cram shelves and cupboards in the art studio. Nevertheless, they might rate Netflix as our top amusement. 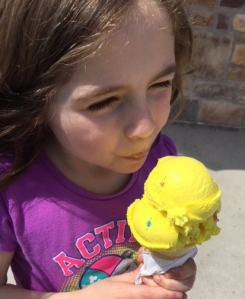 The grand girls, creative for sure, are also active. We soon realized the need to scout play structures, beaches, hiking trails, and ice cream shops.  Well, maybe the ice cream is as much for us. So far we’ve taken them to five different play structures, three ice cream shops, one beach and one hiking trail. We tried a mini-golf course last summer, and have another one lined up for this year that also features a go-cart track. A few months ago Paul and I found the back road that led to the

three gargantuan crows, sculpted by a local artist and well-known as a road-side attraction. We intend to give Rayna and Britt a close encounter with the crows this summer.  Their own river-resort town has plenty of entertainment, but the novelty of new destinations delights us.

Likewise, we have made it our mission to explore the area with all potential guests in mind. To begin, I familiarized myself with the schedule of the Uncle Sam Boats, the three-decker tour boats that crisscross the river all summer. I must have done the Two-Nation Tour at least a half-dozen times over the past two summers. I could probably be a guide at Boldt Castle, the featured historic edifice of the region. And last summer, I took guests on the shuttle to Singer Castle twice. For those who appreciate watercraft history, I’ve toured the Antique Boat Museum, featuring world class wooden boats. I’ve previewed the Frederick Remington Museum and Michael Ringer Gallery for the artsy visitors. I record the Clayton Opera House performance dates and all the weekend festivals on my calendar. A dear friend highly recommended the waterfront theater in Gananoque, so I have that earmarked for Marie. Doing the advance legwork allows us to know the region and enjoy the sights.

Most fun of all is sampling the restaurants and pubs in order to find those best suited to friends and family. Those of you who live in destination cities and regions have probably followed this routine. We have pretty much identified the local bars and roadhouses that serve the best food through the off-season. However, now that it is river-season, anything not on the water moves to bottom of the list. All life in the summer revolves around the St. Lawrence River.  So I have a list of waterfront destinations that will work for a range of tastes. Dock-of-the-Bay, The Pointe, Bonnie Castle, and Bella’s all make the list. We have yet to try and rate Edgewood Resort, the Channelside, or the Chateau. So much work left

to do. And just to be sure the spirits purveyors are up to par I better revisit Dark Island Distillery, Thousand Islands and Coyote Moon Wineries, as well as the Wood Boat Brewery.

Any of you former guests may recognize the aforesaid locations. Yet, we make new discoveries all the time.  So if you make a return visit, you won’t necessarily have a repeat experience. This year we’ve declared DiPrinzio’s, just opened last fall, to have the best pizza and wings on the water. To

confirm that we’ve tried it three times. Less than a mile from our house, an entrepreneur, known as the Sassy Lass, set up a shiny green trailer to serve breakfast and lunch on the

island. When she is not cooking, she performs comedy and sings at local night spots. We plan to try out her breakfast tomorrow. We can’t leave anything to chance.

The first summer visitors, our nephew and his family, arrive next week. Technically, not our guests, as they have reserved a cottage on the river near Reed’s house in Gananoque.  However, we are hoping to arrange a day during which they can visit our side of the river.  We got our boat in the water just in time to make a trial-run to a prized fishing area which Paul plans to share with Jim and his son, Will.  We navigated our boat into the Canadian Channel among islands named Maple, Pike, Ice, Corn, and Deer, which reveal their simple history. Other island names spark imagination: Fairyland, Huguenot, Zavikon, and Cleopatra. With luck and the right winds, next week’s guests might score a large fish on the spot we checked out today.

On this section of the river I discovered even more possible destinations to which I might ferry eventual visitors. We passed Grenadier Island, which holds its own golf-course, accessible only by boat. We came in sight of Dark Island, upon it Singer Castle, another legendary survivor of the Gilded Era. We cruised near the waterfront village of Rockport, Ontario, with its quaint church and tour boat landing. How novel to take guests into

Canada by boat. Not far off the shore, divers explored a shipwreck on the river bottom. Toss would love that. Before we returned to our slip we confirmed docking on tiny Mary Island, a state park, where we hope to take the granddaughters for a picnic.

Scouting the region for granddaughters and guests has become our version of the Star Trek mission: “Where no guest has gone before.” We take reconnaissance seriously.