I saw a wall plaque that read, “Don’t look back because that’s not the direction you are going.” And I support that. However, sometimes reflection allows us to see life patterns and make some sense of it all.  Therefore, I can’t help but examine events in my own life searching for meaning. In his book “When Descendants Become Ancestors” David A. Kendall, PhD refers to this search as connecting the dots. He explains, “When I reflect upon my life to this point, it all seems connected. One event leads into another, and is itself the result of a prior event. What I previously considered a coincidence or accident now seems perfectly related to other occurrences.” This past week, one series of dots stood out so clearly to me, yet each dot represented a person.

My nephew Jim and his family spent this past week in a nearby cottage on the Bateau Channel of the St. Lawrence River. Strategically scheduled to coincide with opening day of muskie fishing, Jim would fish with his son, Will, in their boat. Reed and Paul would fish from Reed’s boat, two boats necessary as casting muskie lures most effectively (and safely) is done with two fishermen per boat.  The only exception when Paul would take Jim and Will trolling in our new boat to a distant location.

Paul, a self-taught fisherman, came to the sport of muskie fishing through the modeling and inspiration of his Uncle Joe Phillips. In the seventies and eighties Paul researched all aspects of muskie fishing: the tackle, the techniques, and the water.  He acquired his first muskie-fishing boat, the Esox and proceeded to locate the best local muskie lakes. Once Reed came along, we upgraded to the Red Flasher which allowed us to venture farther from home and into Canada. I became a fan of the sport just so I could spend days on the water with Paul and Reed. And incidentally have caught a couple muskies myself. Two bigger and more customized boats would follow, specifically outfitted for muskie fishing.

Reed appeared to possess the same passion for fishing as Paul. After his first muskie catch in 1991 all other fish became just bait. (I borrowed that phrase.) Paul and Reed joined Muskie’s Inc., the national organization, as well as Penn-Ohio Muskies, our local chapter. They had found their like-minders. Every caught and released fish would now be registered. On Lake Baptiste, Ontario, Reed would catch his first Canadian muskie. Ironically, in 1997 he would catch his 100th muskie in the same lake and in the same bay. Reed earned awards and recognition from Muskie’s Inc. along the way. He advanced his knowledge and skill. Coincidentally, Reed’s life choices led him right into the heart of the world’s premier muskie fishing on the the St. Lawrence River.

Paul’s nephew Jim, about seven years older than Reed, had often been our fishing companion.  Jim’s father, Joe, soon bought a boat, so Jim and his brother Andy joined us on many of those Canadian trips. However, it became apparent that Jim had the same intense interest in muskie fishing as Paul and Reed. That first large fish in 1991 made a lasting impression on Jim, as well. Whenever possible, Jim fished for muskie, on the Allegheny River, Chautauqua Lake, N.Y., and in Canada. And in recent years, Jim has committed to at least two annual fishing trips to the St. Lawrence. A week ago Jim launched into muskie season, boating a 45-inch fish out of Reed’s boat. For the next three days the muskies resisted, no matter the time of day or evening.

On Thursday, with winds out of the northeast, the least favorable for fishing,  Paul motored Jim and Will to the fishing spot that Paul and I had scouted three-days straight.  Will, age eleven, has experience with northern pike and muskie, but had never  encountered the heavy beasts that frequent the St. Lawrence.  Will hooked, boated, and released three incredible muskies before noon. I knew this was a benchmark experience. Will had become the newest member of an elite family group. Dots connected.

Visits to Jim and Quinn’s cottage last week brought back nostalgic memories of our summers in Canada: the rustic cabins and their slightly tilted floors, the box of videos from home to be viewed on a portable T.V., the aroma of Grandma Findlan’s meatloaf, the geese, the loons, and occasional osprey nearby.  Likewise, cottage activities have not changed over thirty years. The kids still bobber-fish off the docks, climb in and out of the icy water, shivering, as we adults gaze 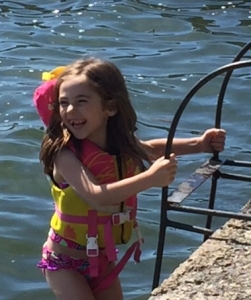 across a Canadian channel to a pastoral island. On oldies radio I heard I Want You to Want Me by Cheap Trick,  a song that was on a continuous loop at the lodge where we spent many summers late 80s-90s. Of all the recurring patterns, none struck me as much as the four guys, three generations, captivated with the muskie. Will’s three-muskie day is sure to become family legend. 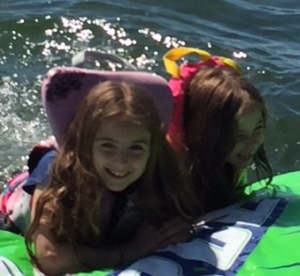 6 thoughts on “Dot-to-Dot: A Fishing Story”