Good versus evil. My soon-to-be-six-year-old granddaughter, Britt, understands the dichotomy at the heart of all mythology and philosophy. Naturally, she oversees the world of good. And the center of her influence is Reed’s old G.I. Joe Mobile Command Center. Britt, who is hoping for a Barbie and the Dream House for her birthday, adapts quite easily to strategies of war against evil with the hodge-podge of Reed’s vintage toys.

As the evil-team coordinator, I must build my own base. With remnants of the colored blocks from my own childhood, two different sizes of alphabet cubes, and newer wooden Melissa & Doug blocks, I construct a headquarters, a weapons depot, and a spacious jail. Britt designated which characters would be my evil cadre. The chain of command works as follows. Penguin is the boss-bully. Just under him are a couple of narcissistic shrewd superheroes. Next in rank, those with brute physical power: two wrestlers and Chuck Norris. Three finger-puppets serve as the lookouts. Don’t miss the irony. Britt’s innate sense of gang power-structure is spot on. I catch myself drawing frightening parallels to reality. 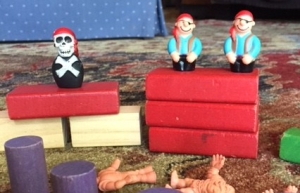 A Collaboration of Good

Britt’s force of good is led by Wonder Woman, the only female character in the entire toy collection. (Female representation in super-power toys was dismal in the 80s.) However, Britt explains that Wonder Woman shares the lead with Flash. They operate as a team. Having just graduated from Kindergarten, I wonder how soon her belief in collaboration will be tested.

Representatives from many different factions comprise the good-team forces. G.I. Joes, the “Real American Heroes,” dominate Britt’s good-team. After all, in the cartoon version they followed the principles of fighting for freedom, never giving up, and always being there to defend our country.  W.W. II propaganda had nothing over the 80s. Unlike reality, no characters seemed to be hurt in the animated series. At the conclusion of each episode the viewers were provided some kind of life lesson and the adage, “Now you know and knowing is half the battle.” 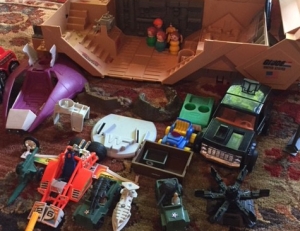 as M.A.S.K (Mobile Armored Strike Kommand) supports the good-team, as well. M.A.S.K., another animated series from the 80s, portrayed ordinary men and vehicles transforming into an extraordinary team to battle V.E.N.O.M.  Illusion was the ultimate weapon. In reality, every generation has its own nemesis, a Vicious Evil Network of Mayhem, I just hope ours is no closer to home than North Korea.

In addition to the trained forces, Britt also has Dan Aykroyd with his Ghost-Buster proton pack. She has Lion-O, a cartoon character who led the ThunderCats with his unbreakable Sword of Omens, upholding justice, truth, honor, and loyalty.  She has an armored He-Man character and a handful of Muscle-Men. 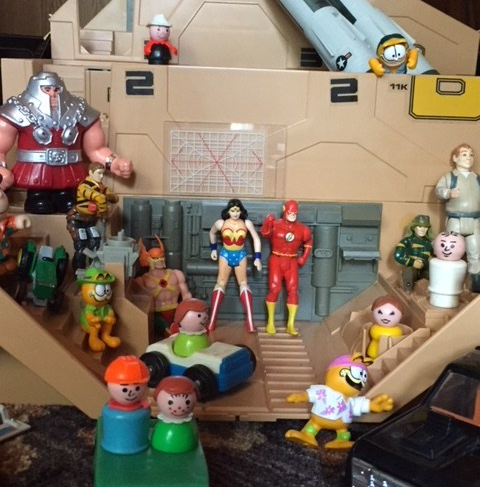 Unlike my evil team, civilians live in Britt’s complex. She has Play-School people, Charlie Brown, and at least three pet Garfields. I noted that everyone makes a contribution, regardless of their differences. All individuals matter. She organizes a completely integrated Command Center and diversity rules.

Once we have our forces in place, my team makes a plan to raid Britt’s base to acquire weapons and prisoners. I have to make-do with Paul’s wagon from the 50s, a handmade wooden cart, and one jet. I manage to get a couple torpedoes for my arsenal, but 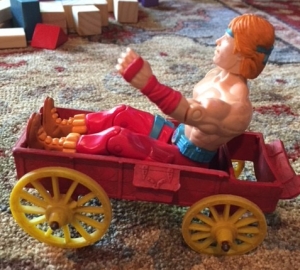 Britt tells me I’ve acquired fakes. And the only prisoners I am able to take are the smallest Muscle-Men. Even then, as soon as my people close the jail door, Wonder Woman swoops in and frees them.  In every battle and scenario the good-team wins with more troops, more weapons, advanced technology and power.

Besides the label, Britt and I have not defined what makes one team good and the other evil. We simply focus on who has the most weapons, who captures the most prisoners, and who controls the most talented troops. After a few skirmishes our aggression subsides. I think Britt senses that a struggle for power and not much else is at the root of our conflict. She suggests, “Let’s just all be on the same team.”  The fighting ends, we reorganize all the players around the Command Center, and we have a snack. If only peace were that simple.