Since we said good-bye to Musky, our 13-year-old Labrador retriever, last July, I have become dog lazy. I’ve grown accustomed to sleeping until the sun rises, having half of the bed instead of one-third, and walking on the treadmill rather than the roads and trails. My socks don’t get soaked stepping near a water dish.  We have no towels hanging by the door to wipe muddy paws or rain-soaked fur.  The only reason to cover the couch is to prevent coffee spills or popcorn crumbs. I clean the floors less since dust bunnies are more transparent without dog hairs.

Likewise, fewer errands are required without Musky. No more trips to Tractor Supply for multi-packs of Pork Chomps or 40-pound bags of IAMs senior. The Cheerios (Musky’s before-bed snack) last so long they get stale before we finish them and gallons of milk exceed expiration dates. All half-sandwiches that I habitually bring home in “doggie-bags” are mine for next-day lunch. We go days before picking up groceries, when we used to buy rotisserie chickens for Musky every two or three. Plus, there’s no need to visit the animal clinic for heartworm chews or anti-tick collars. Curiously, we’ve enthusiastically offered to pick up a special brand of food when needed for Reed’s black Lab, Wiley. And if Wiley needs a ride home from the vet, Paul gladly volunteers.

Furthermore, short trips away from our house have no curfew as they used to.  Still, we have momentary pangs that we need to hurry home to let Musky out.  Neither of us confesses our discontent to one another. When we ride in our vehicle the AC cools us, and we don’t lower the back windows to fan hot black ears. We drive past rest areas on I-90, never stopping until a break for lunch. And then we park close to the service plaza rather than the outlying dog-walk area.  We are free to plan an overnight stay or weekend get-away. But we don’t. We haven’t yet adjusted to freedom of travel. 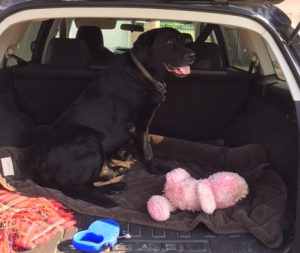 Wiley, who is actually the son of our dog, Musky, visits me this weekend. The girls took a trip to their other grandparents and the guys went muskie-fishing down river. So Wiley and I have quality time together. He wags his tail furiously when I tell him how much fun we will have. I line the back of the Subaru with his quilted Orvis bed, toss in his favorite fluffy toy, and place his laminated immunization card on the dash with my passport. We clear customs with no problem.

Although Wiley has visited our house before, I know he will need a day to settle in. We’ve arrived in the evening and he’s at my heel everywhere I go. As I’m taking a quick shower, I hear low pitched growling, followed by staccato vicious barks. Still wet, I dash out in a robe expecting a visitor, human or animal. Neither. I peer out the sliding doors into the dark, Wiley’s saliva spraying the glass.  Thousands of neon lightning bugs signal one another. I guess Wiley doesn’t speak firefly.  I coax him into the bedroom, where I 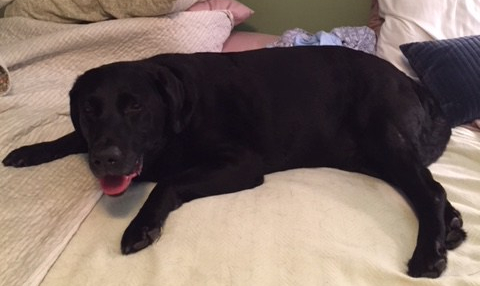 place his bed on the floor next to mine. I climb in and Wiley lifts his front paws onto the mattress. He wants to sleep under the fan as well.  I get up and boost his thick back-end onto the high mattress. I feel the endorphins release, like old times. 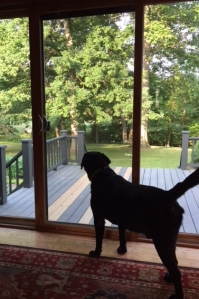 I wake suddenly to wild barking. The clock reads 12:00. A motor vrooms past the window, heading down Sunset Drive. Wiley hears no traffic at his own house, so he’s in defense mode. I soothe him and we fall back asleep. At 1:30 a.m. the same rumbling motor passes again, heading the opposite direction. Wiley erupts, but never leaves bed.  At 5:00 a.m. he stands, jumps off the bed and runs woofing to the sliding door. Barely visible through the trees, a greens-mower does circles on number one. I pull on clothes for our morning walk. Thanks to Wiley, I’ll see the morning unfold.

Wiley, who has a two-acre fenced yard out his back door, has to walk on a leash at my 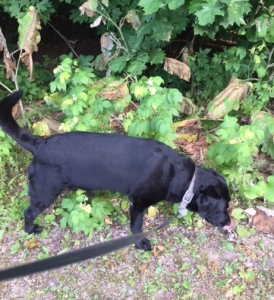 house. He doesn’t mind it one bit and charges ahead on the trail, his Schwarzenegger-neck towing me like a water skier. Fortunately, I wore tennis shoes rather than flip-flops. I do a power walk to keep pace. We have half-a-dozen dog neighbors who do regular strolls on the roads and paths, so odors are abundant. He dashes ahead, suddenly switches back and charges into the brush after a squirrel. My arm jerks 180 degrees front to back. How did I forget the nimble footwork of Labs?

After more than two months of waiting, our new patio doors were installed last Thursday. Troy, our contractor, is in the process of sealing the freshly-stained trim with coats of polyurethane. Today’s layer must dry before tomorrow’s is applied. I build a barricade in front of the new doors because Wiley thinks reaching up with his paw will open the doors in order to charge the golfers. Wiley sees birds, turkeys, an occasional deer or coyote in his back yard. So for the first 36 hours of his stay, he barks like a fiend at every golf cart that passes our house.

I might as well fulfill his wish, so I put him on a long rope attached to a tree in the back yard. I take my book, a Coke Zero and bowl of water and settle into a chair. Wiley relaxes and dozes until the breeze dies and biting flies buzz us. At that point we head indoors. I could have painted the fresh trim around the new doors or I could have filled nail holes, but I had promised Wiley he would come first.  I switch on the AC and we settle in for three episodes of Anne with an E on Netflix. Wiley has the exact viewing taste of whomever he’s with, so he curls next to me, no complaints. 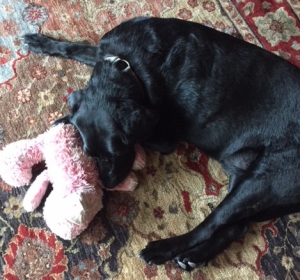 Just as I expected, after the first night he slept soundly under the fan on my bed. Early mornings we walked, relaxed in the heat of the day, and walked again in the evening. By the time we parted on Sunday I had finished my book, sketched in a painting on canvas, watched I, Tonya and Chappaquiddick. Wiley encourages me to do exactly as I please. What a deal. In return he only asks for food, water, walks, and love.