I lugged my bags into the sealed vault, as if crossing a portal to a timeless space.  Since my mother’s death five years ago, September 12, 2013, my dad has maintained their apartment exactly as it was.  No knick-knack, picture, or throw pillow moved. Collectibles, accrued over decades of flea-market searches, fill every corner, shelf, and table. Children’s china cups, illustrated with nursery characters sit in a prim line on the

On the walls a Red Cross nurse beseeches volunteers; a young lady in a 1912 sapphire gown and wide brimmed hat attests to Mecca cigarettes. Pictures of plump children with golden ringlets hang in every room. Two-dozen gilt-trimmed commemorative calendar plates form a constellation behind the royal blue damask sofa. The flavor of the past even touches the utilitarian rooms. In the bathroom delicately-beaded, fringed purses hang like mosaics from pegs. Above the kitchen cabinets blue-embellished gray crocks stand equidistant apart, still proud of their long forgotten purpose.

My dad has lived on here as a widower since my mom’s death, his presence nearly undetectable. A meticulous man, he leaves no personal item in sight; not a book, a magazine, or even a dirty cup. He has a cream-colored chair and navy ottoman across from the only new addition to the apartment, a flat-screen television. Dad permitted that change only because the outmoded console set had gone on the blink. If any piece of furniture is shifted for vacuuming, it is carefully returned to its concave impressions.

Despite the abundance of curios, the space does not overwhelm. Tastefully arranged against a clean eggshell backdrop, with plenty of windows simply dressed, natural light fills the space. The thick champagne-hued carpet muffles noise and creates a plush floor for stocking feet. Now-faded Readers’ Digests, the final two my mom read, rest on a wooden stool by her wing-back chair.

Evidently, living among my mom’s things does not pain my dad.  And when I visit, I don’t find it morbid at all, mostly comforting, as if my mom’s arms embrace us here. My sister, Tami, and I have discussed clearing out the collectibles that require painstaking dusting. But over the years I believe my dad took his identity from those talismans of time with my mom. He no longer has her, but he has all of the evidence of their life. So we found him a cleaner to come twice a month to maintain the spotless perfection. 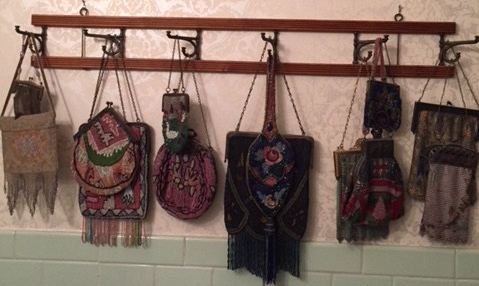 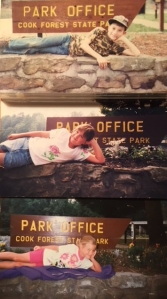 decorations for Stevie’s bridal shower, the reason for my visit. We girls drank wine and Dad had vodka. Holly laid out a design to be painted on reclaimed window glass. Stevie embellished bouquets for her October wedding with pine cones she had collected from Cook Forest.  I suspect the pine cones served as the first trigger to my mom’s absence.  My mom loved Cook Forest, and she and my dad had taken all the grandchildren camping there. Stevie, especially, carried on the tradition. The hot, humid pattern of late summer persisted, exactly as it had the night my mom died. Stevie voiced our thoughts, “This feels like the night we put things together for grandma’s memorial.”  I swallowed hard, suppressing tears.

The next day Tami and Holly would accompany Stevie to have her wedding gown fitted, meet with a florist, and finalize a wine order for the reception. Dad and I shopped for shoes and final components of the bridal shower centerpieces. We met at Tami’s house that night, confirming last-minute details for the luncheon. “What would you like to do on your birthday?” Tami asked my dad, striving to keep our thoughts positive. Dad’s birthday in four days coincides with the anniversary of Mom’s death. I’m convinced my mom intentionally coordinated those dates so we would always have a distraction from our grief. No plans for the birthday confirmed, it felt as if we were all caught in a L’Engle tesseract. 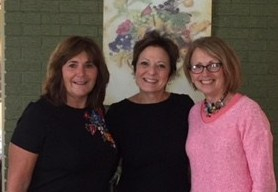 By the day of the shower a cold front had arrived bringing steady rain. I’ve always noticed how a drastic change in weather affects temperament, elevating or discouraging, depending on what mood came before, rather than what conditions. Our luncheon with Stevie’s friends and family unfurled with merriment. Bottomless mimosa’s lubricated optimism. We anticipated Stevie’s married life, and temporarily forgot the looming anniversary. Tami and I reunited with our pseudo-sister, Judy, the proprietor and chef of Amazing Foods. Judy has fed us on other happy occasions. But, the last event Judy catered for us was Mom’s memorial.

Later that evening, we five, Tami, Stevie, Holly, Dad and I, gathered in a booth at the Ale House. Holly put our melancholy emotions into words. She confessed her appreciation for her grandparents, and the part they had played in her life as a child and young woman. She told us how she asks grandma for advice even now. Stevie who lives in the apartment above grandpa, spoke of curious sounds, sightings, and communications so like those of grandma. We all teared, and my dad looked so despondent, I thought he might collapse. Tami and her girls dream of my mom, but she contacts me in practical ways. Earlier that day, while looking for an envelope in her desk, I came across twenty-three scraps of paper. Book lists. Titles she’s read, and perhaps authors she wanted to read. Mom and I will commune through books.

As I headed out of town on Monday morning, I waited at the red light at Caulfield’s Corners. An intersection of five streets on the north side of town, every direction holds vital memories. Sharply to my right, the steep incline of First Avenue, a street I traveled often to and from my elementary school when teaching third grade. Just past that, Rocky Grove Avenue, where my dad graduated high school in 1949, and my son in 1999. Straight through the traffic light rises N. Thirteenth Street, the road leading to the little league field as well as the St. Patrick’s Cemetery, where many Findlans rest. I will turn left, heading west past the house where my son was born and near our charmed house of thirty-one years, then north.

Later I had a revelation. On the day of the shower, Paul and Reed caught three trophy fish, despite unfavorable fishing conditions. Curious as to why,  I learned that the earth, the moon, and the sun had aligned that day, a new moon.  That planetary event had coincided with Stevie’s shower, dad’s birthday, and mom’s death as well.  No wonder our emotions had intensified.  Our five lives had been collected into a cosmic intersection of the past, present, and future.