“Can you not have a do-over? Ever?”  Sally Field laments in her memoir, In Pieces. If possible, how many of us would go back in time to respond a different way or choose a different path? In retrospect, our current self might see alternatives, but at life junctures, we did our very best. Perhaps all those little steps (and missteps) in life’s journey led to this point. I wouldn’t change a thing.  Dr. Maxwell  Maltz, author of Psycho-Cybernetics espouses that decisions are not inherently right or wrong. We make a decision, then we make it right. Or we really mess up, and make it wrong. Either way, we can’t go back, we can only go forward.

When we bought our home, Paul and I elected to skip the house inspection in an effort to expedite the purchase.  That spring of 2016 we were very busy caring for family members plus traveling between Pennsylvania and Ontario a great deal. Besides, the house was fairly new and well-maintained. In a few months, during a heavy rain, water dripped from both sides of our vaulted ceiling. The first roofer we hired found nothing, but concluded something like, “Roof leaks are tricky.” The second contractor tapped down nails that had pulled out, and recommended a new roof.  For a year that did the trick.

This past summer, a strange bow appeared on a section of the roof.  At times it rose higher as if it were a blister. Then it would settle again. We were told that the sheeting under the shingles may not have been nailed properly causing it to heave with changes in the weather. Paul bought new sheeting, a package of matching shingles, and lined up a contractor to help him repair the section this Saturday.

During a heavy rain this past week water dripped from a doorway between our bedroom and bath.  Against all good judgment, Paul climbed onto the roof to see if he could identify the exact location of the problem. He found a roofing nail sticking up from a shingle, leaving a gaping hole. He tapped it down, sealed it with roof cement and we waited for the next rainfall to test the fix. The very next day a driving rain fell, and it wasn’t an hour before water ran over the door frame and onto the floor. Drat. I checked previously leaky spots… damp. Paul ascended the ladder again.  I thought, “This could turn into a disaster worse than leaks.” He found nothing and returned safely to the ground.

Irritation that we had been misled as to the condition of the roof would not change the situation.  No way could I have Paul up on the roof all the time sealing holes with roof cement. I vocalized what Paul might have been thinking, “I’m willing to start over with a whole new roof.” We can’t have a do-over, but we can get a re-do.

Back to the Drawing Board

While waiting for a call back from the roofing company, I set to work finishing a sketch I had done on canvas, a project that I’ve postponed since last spring.  I plan to combine acrylics, my usual medium, with oils, which I have been learning to use at monthly classes, to paint a scene of my two granddaughters by a campfire in the snowy woods.  I have several free days ahead of me to finish the sketch and begin blocking in the figures.

When I set the canvas on the easel and studied the sketch I was not happy. Both girls stood too far away from the small fire. Probably the safest situation, but that first cold, wintry day, both of them stood inches from the small flames. In my rough drawing Britt appeared to be floating in mid-air, and Rayna’s neck was too long. Both girls held sticks. Rayna poked the fire, and Britt had just tossed a twig into it. The fire ring that Rayna had built out of rocks seemed to be sliding downhill. I erased and lengthened Britt’s legs. Now she appeared to be about ten years old, not five. Back to Rayna. I rubbed out her right arm and shoulder, redrew it so her neck was tucked into her collar, as it appeared in the photograph I used for reference. Now I would have to adjust her legs. I spent the better part of an hour erasing and penciling, making no satisfying headway. From oil painting classes I’ve learned that the preparation for a painting requires as much time, even more it seems, than the painting itself.

In the past, I would have been impatient, trying to repair the drawing mistakes with paint. I consider starting over from scratch.  With so little time invested so far, I bravely open the jar of white gesso, a medium that covers everything I have so far. With a completely white canvas, I am ready to start fresh.  This is the perfect do-over. No record will ever exist of the first disproportionate drawing.  After two hours of sketching, erasing, drawing, over and over, I have portrayed the girls by the fire. In order to correctly judge the proportions and perspective, I will come back tomorrow for a final evaluation. 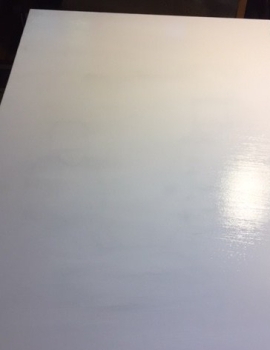 Twice, Thrice, Whatever it Takes

“We do it right, because we do it twice.” My good friend, Jim, remarked that this could be the motto for his construction crew. His crew consists of himself, his brother, and his father who do beautiful renovation work on their own homes. Jim’s full-time career is Assistant Dean of Education at Slippery Rock University of Pennsylvania.  Also a brilliant mathematician, Jim is a smart guy. If he declares it takes two tries to get something right, it’s not to be disputed.

Life is too short to fret over mistakes. No do-overs. Yet, every day presents itself just like a white canvas, ready for re-dos.  And I’m not too stubborn or discouraged to restart a stalled project, recommit to lapsed goals, or re-shingle a leaky roof. 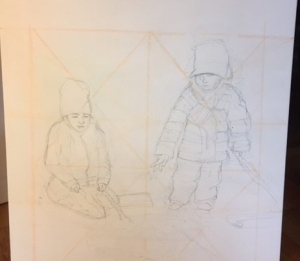 2 thoughts on “Do-Overs vs Re-Dos”