With the famed Adirondack Mountains located less than three hours from our house, one would think by now we would have taken an excursion there to view the fall foliage. This being our third autumn in northern New York, we had our annual conversation about the possibility.

Paul, “I’d really like to make an escape to the Adirondacks sometime.”

Paul, “I wish we could find an old-time lodge, a place with character.”

Me, “I hate to leave on a day when we might see the girls.”

Paul, “Right, and we should wait until muskie season ends, anyway.”

Our ideal Adirondack accommodation would feature large windows open to the vista of the hazy blue ranges stacked one behind the other, the highest peak, Whiteface, punctuating the panoramic view. Our room, or better yet cabin, would be paneled in pine, accented with rustic furniture, fish mounts and vintage antlers mounted on the walls. Perhaps worn oriental carpets insulate the floor in front of a crackling fire. Locally constructed Adirondack chairs might recline on the deck amidst vivid gold and crimson trees, as an alpine lake sparkles just beyond.  Comfy furniture with cozy throws  would sprawl before a huge flat-screen television, so that after the flaming sunset we could watch the playoff game. We might brew fresh coffee in the morning or stroll around a village to find a quaint old diner for breakfast.

WAIT…I just described our house. No wonder we don’t leave home. Except for the mountain ridges, we live in our ideal rustic cabin. That’s why this place appealed to us in the first place. Nevertheless, a week ago as we sat sipping coffee, gazing at the view from our sofa, we replayed our conversation.

Me, “We really should take a drive to Lake Placid. The girls are in school and Rayna has figure-skating after.”

Paul, “That’s a possibility. The winds are way too high for fishing.”

Me, “If we leave now we could just go for the day.”

Off we go. The sun breaks through the clouds as if affirming our spontaneous road trip. We take a timeless country route through pastoral hamlets and along miles of farmland, admiring all the shades on the landscape palette. Who knows, maybe we would stumble into a vintage retreat after all.

I was just hungry enough to start wondering about lunch when the road twisted and turned among foothills. Just past the first village in the park region, a run-down three-story home, white-paint peeling, came into view. As we passed it we both noticed a faded neon sign in-congruently towering above some overgrown trees, Twin Lakes Hotel. Paul stepped on the brakes and pulled into an empty lot to turn around to appreciate the scene from a past era. In a front window, a neon beer sign glowed. However, no other clues indicated that the establishment was a commercial enterprise. Spindly geraniums drooped on the porch steps. Abandoned chairs and a table blocked the front porch entry. All windows appeared draped in faded curtains, assorted knick-knacks lined up on interior sills. We drove into a packed-dirt driveway that led us to the back of the house. A rooster, chickens, and a bandy hen scuttled out of our way.

Two middle-aged women were just exiting the back door of the house, heading to a small SUV. I rolled down my window to inquire,

“Excuse me, is this place open?”

“For sure and the food is excellent.”

The Hotel Without the Rooms

Paul turned off the engine and we climbed out. We took a moment to admire the crowing 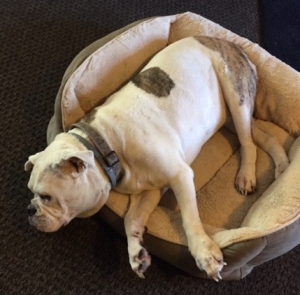 rooster, climbed a set of rickety stairs, and entered a dim, but warm room. A long bar was just to the left, one patron leaned on the end by the door where we stood, our eyes adjusting. We had stepped back into 1958. We could not navigate our way to a stool at the bar without circumventing a slumbering cream-colored bull-dog, stretched out on her side across her sheepskin bed. The bar maid, gave us a greeting and I asked if we could pet her. “Of course, that’s Bella.”  Having befriended Bella, we stepped past her and took high stools at the bar.

Several collections of Irish whiskey decanters were stacked three deep on the floor behind the bar amid boxes of bar supplies and unopened cases of cocktail mixes. All of the predictable liquor bottles, some pretty dusty, assembled in tiers at eye level before a chipped mirror. The remaining wall space was layered in miscellaneous signs, advertising or nuggets of bar wisdom, apparently representing every era in the tavern’s history. Predictably, a television hung from a corner of the ceiling, relating local catastrophes and political campaign propaganda, the only clue that this was present-day.  On the wall a few feet behind us, a large poster waited on statistics for the local buck pool. At the end of the narrow room, a dart board invited competition. 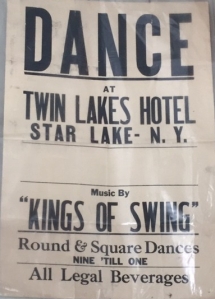 We ordered light beers and studied the front of the menu. Before even perusing the choices, our hostess told us the specials, fish sandwich, ham and bean soup. Paul ordered the sandwich and I the soup. While waiting for our food we explored the rambling first floor. The large unfurnished room behind the bar appeared to have been the dance floor, the hardwood boards now dull and gray. Instead of potential dance partners, cartons of restaurant supplies lined the perimeter. At the end where a band might have played, pots of root-bound house plants and stacked tables assembled. 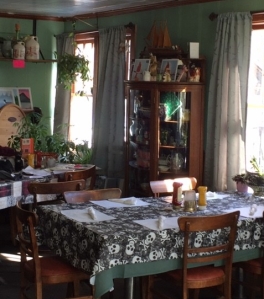 A wide doorway led into an adjacent dining room. At least thirty might be seated at rectangular tables, seasonably decorated with skull-printed table cloths. Apparently, Twin Lakes had a busy dinner trade. Two wooden hutches and other family-like heirlooms gave the room a homey atmosphere.  From the dining room, one can circle back to a narrow doorway into the bar or step into the family kitchen, seemingly where all the cooking takes place. Paul and I both flashed back to a similar house-turned-restaurant in Fryburg, Pennsylvania, the Wayside Inn, also known as Hitler’s. 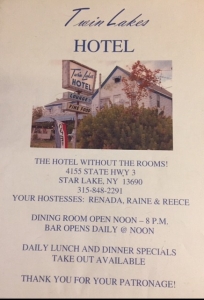 While we ate, the first patron nursed a drink and a second came in to sip a beer at the corner spot. Our bar maid  discussed local politics with the men. Paul asked her about the hotel’s history. We learned she operated the place for twenty-three years, her mother before her for thirty, and before that another woman, but her grandmother has always been involved with the hotel. She believed the deed dated back to the late 1800s. Open year-round, she recounted how the cycles of patrons come and go with the various seasons, fishing, snowmobiling, tourist, and hunting.

We told her that we came in because of the two women who had recommended the food. She laughed, “That was my aunt and mother!”

We savored our luck at finding such a vintage stop and motored on, anticipating more of that old-time Adirondack experience. Traffic increased as we neared Saranac Lake. To our delight, the mountains rose higher and loomed closer. Soon we joined a line of traffic winding down a hill, a cobalt blue lake ahead, a ninety-degree turn right. Lake Placid took us by surprise.

Tourists strolled both sides of a narrow village street that snaked on as far as we could see. Parallel-parked vehicles, many of luxury makes, lined both sides.  All variety of shops, cafes, outfitters, and restaurants stood shoulder to shoulder, prosperous and trendy.  Paul glided the car slowly forward and I ogled the sights. I saw elegant resorts, barbecue joints, a Starbucks, high-end clothing shops, a spa, and the Olympic Center. I’ve never been to Vail, Colorado, but this is how I imagine it.  I called to mind Sedona, Arizona, but without the jeep tours.

We followed signs out of the village, hoping to find a view of the High Peaks. I had the accordion folded map of the region on my lap. We followed the road as far as we could around the High Peaks region coming no closer to the famed summits, so we reversed our course back into Lake Placid. We drove the twisting route labeled Whiteface Mountain as far as possible keeping that rocky peak in our sights.  At last we had to turn around at a souvenir shop where tourists might pay to cross a bridge for a look at a cascade. We skipped that…we see plenty of gushing water.

I studied my map to confirm we had driven all the roads that surrounded the High Peaks region. The only way to get closer would be to actually hike, not part of our sojourn today. New York has carefully protected this wilderness region. Back into Lake Placid, where the sidewalks swarmed with visitors, I spotted a couple Adirondack-themed hotels for a future visit. Without saying a word, Paul and I had both reached the same conclusion. We would return to our cozy quiet cabin just three hours away.

We retraced our route back through the sleepy villages, past the Twin Lakes Hotel, and I felt hunger pains. We hadn’t had food or drinks since our early lunch. Actually, we hadn’t even gotten out of the car except once at the cascade souvenir shop. Paul suggested we drive into Alexandria Bay and get take-out on our return. I insisted we should look for a roadside tavern along the way. If we saw a place that had plenty of patrons parked in front we would stop. 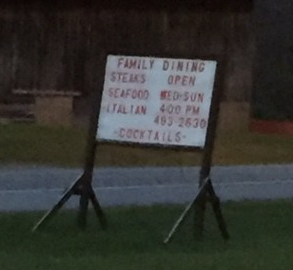 Just outside Carthage we spotted a roadhouse, at least two-dozen cars in front, Belva’s Sahara Restaurant.  We stepped into the late sixties, family dining to the left, grill and bar to the right; we had another flash from our past, the Carriage House. We took seats at a Formica table, our chrome chairs covered in naugahyde.  A large horseshoe bar bustled. The barmaids mixed all kinds of cocktails and balanced them on trays. I ordered a wine, no measuring here, fill the glass to the rim; we call it the Sugar-Lake pour. Waitresses hustled in and out of the kitchen with plates of Italian pastas, steaks, and fish dinners. Once when the swinging door opened I saw a large quarter of beef deposited into a cooler by an aproned man. Belva strolled out of the kitchen and sat at the end of the bar with a

highball. The peculiar display of dolls in an abandoned cooler in the lounge must have been hers. Paul and I both regretted ordering full dinners, only because the pie and dessert list was extraordinary, but we had no more room. 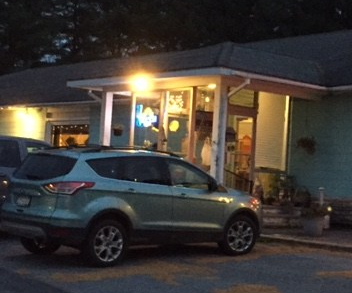 By day’s end we had fulfilled our objectives for the trip, but not as we had expected. We admired stunning scenery, we dined at authentic nostalgic eateries, and we returned to a cozy cabin to enjoy the playoffs. Looking back it feels somewhat like a Twilight Zone episode. As if we discovered a time warp encircling the Lake Placid region. I’m sure we’ll go back to the High Peaks with walking shoes. But I wonder if we’ll enjoy such a sentimental journey.

6 thoughts on “Sentimental Journey to the Adirondacks”