We opened a year-round roadside diner…on our deck…for the birds, chipmunks, and squirrels. We have a counter, patio seating, high perches and a snack bar. Paul is the short-order cook, server, and manager. He works all the shifts, purchases all the supplies, stocks the shelves, and mops up. I’m simply part owner. This morning he trudged across the squeaky snow in sub-zero temperatures, spreading the seeds and sunflowers on every surface. He greeted the customers, “Hi, guys. Here you go.”

We’re new to the business, still getting to know our clientele.  In late fall the chipmunks scampered about non-stop. They mostly took their food to-go, stocking burrows for the winter. For several days on-end, grackles commandeered the entire eatery like a gang of Hell’s Angels.  Along with their side-kicks, the red-winged blackbirds and cow birds, they intimidated all the regulars. As soon as a chill settled, that mob headed south. The tough winter residents arrived.

Parties of blue jays cruise in by twos and fours. Before long their cronies join, perching on the railing, the adjacent lilac tree, the hanging feeder, and the deck. Yesterday fifteen gathered for mid-morning brunch. They look like uniformed soldiers on R & R in their dusty-blue jackets, tapered hats, and sky-blue tails daubed with white. Although they outnumber all the others, they mingle compatibly.

Breakfast and supper regulars include charms of chickadees, juncos, and nut hatchers. They don’t loiter, simply eat their fill and move on. The tufted titmouse stops in for an occasional meal, as does a mourning dove. Once before the snow fell, turkeys climbed the steps and milled around pecking at the seed.

Woodpeckers, who toil on all the nearby trees, hammering away for hours on end, often take a break to snack on the suet. Each takes a turn, a hairy, a downy, and a red-bellied. We’ve spotted the pileated woodpecker on the trunk of an oak, completely independent, showing no interest in our cuisine. 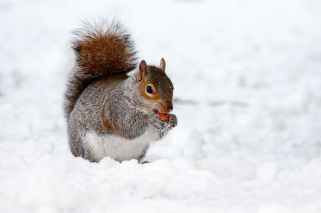 Up to ten squirrels, local gymnasts, bound onto the scene several times a day. The black and grays try out new stunts, dangle upside-down from the suet with one foot, spring from the rail onto the suspended feeder, and slide down the shepherd’s hook like it’s a fire pole. Other patrons are not impressed. Two feisty red squirrels, the only ones to cause a ruckus, juke and lunge at the larger squirrels. No serious skirmish ever results.

One pair of discreet cardinals calls early morning and at dusk. The female confidently steps in for some seed among a group of strangers, but the crimson male waits in the lilac for the deck to clear. Every evening after the other diners have moved on, the demure couple squat on the deck and politely nibble at remaining seeds in the warm glow of sunset.  I’m cheered with the thought that a cardinal represents a “visitor from heaven.”

Our wariest customers forage take-out meals under a cluster of trees 70-feet from the house, our satellite outlet.  We spread leftovers, peelings and scraps of food for raccoons, coyotes, a fox, and other anonymous creatures. Paul scatters corn and apple chunks under our pines for hungry turkey and deer.

One day last week, all the deck patrons dashed for cover when a hawk scouted from an overhead limb.  A couple of times, we found the suet cage sprung in the morning. Something hit the chow jackpot. Everyone is served, no exceptions. This afternoon the snow-covered deck glitters. It’s happy hour. The regular crowd flutters in.  I’m tempted to play Billy Joel.  From inside I drink a toast to our fur and feathered-friends.