Now that we have become “local” grandparents, we can be spectators at the granddaughters’ events. This past Saturday we set out to see the girls in their figure-skating performance in Gananoque, Ontario. The show would start at 1:00. We live just 25 miles away, on the United States side of the border.  We approached Canadian Customs dismayed to see three lines of cars and a line of about eight RVs towing 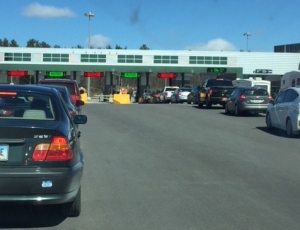 vehicles. I had neglected to consider that Canadians, who had spent their winter in the south, often returned in early April. We had allowed the usual hour leeway. However, if the border guards were meticulous or irritable, the interrogations could slow the line to a crawl. Paul emitted his usual string of epithets.

On average, we cross the border twice a week to see the granddaughters. With other incidental trips to Ontario, we pass through customs about 150 times each year. Because we can’t predict how long the lines at customs will be, we plan our departure for an hour before arrival time. During the summer, when tourists jam the crossing, we allot ninety-minutes to travel. If we have to meet a school bus, or deliver the girls to an event on time, we cautiously allow half a day. Even with careful logistics, we either arrive ridiculously early or fret ourselves into a frenzy waiting in traffic at the border.

Where do you live?  “Wellesley Island.” (Our house is five miles by car from that point.)

Where are you going? “Gananoque.” (That is the first town on the other side.)

What is the purpose of your trip? ”Seeing our granddaughters.” (That usually softens the attitude.)

Paul convinced me that “No” is the only response to the follow-up questions. I have mastered my poker face and am a pro at these:

Do you have any gifts? “No.” (Naturally, we always have little gifts for the girls or items for Reed’s garage.)

Are you leaving anything in Canada? “No.” (All fishing gear ships to our house and we deliver it to Reed.)

Do you have any guns or weapons, mace or pepper spray? “No.” (An honest answer to that one.)

Our passports are more essential than cell phones. I keep mine in my Subaru, and Paul keeps his in the truck. Whenever we travel together, one or the other has to remember to retrieve the passport and move it to the travel vehicle. The way our memories have been failing us lately, it’s a wonder we have not forgotten them yet. Last month both of our passports expired. To renew a passport, one has to submit the current passport along with the renewal application. We strategically staggered the renewals. I submitted mine first, along with extra funds for expedited processing as well as overnight delivery.  For eight days I was curtailed from seeing the granddaughters. As soon as my new passport arrived, we submitted Paul’s and he was temporarily stuck in the U.S.

Likewise, our granddaughters must have passports to travel to our house. I think it 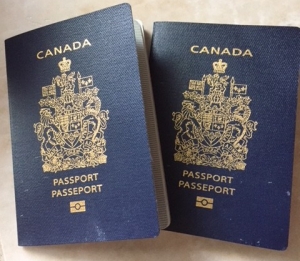 works in our favor that they have our same last name. The first times we brought them to our house, the U. S. Customs officer carefully examined their Canadian passports. The officer leaned near the open car window and asked the girls to give their names. Britt, only four at the time, clammed up. But Rayna shouted, “I’m an American!” That almost got us pulled over for a complete search.  Paul explained that Rayna was born in the U. S. and Britt in Canada. At last, after eighteen months of crossings, the U. S. border guards know us on sight. When I asked Rayna on a recent visit, “How was the border?” She casually said, “Easy. The guard was Pop’s friend.”

Once past customs, no other major hurdles arise. Canada poses no language barrier and driving is still on the right side of the road. One minor difference is conversion to metric. I’ve carried a conversion chart in my wallet that I’ve never used. I go by feel for temperature. If it’s cold I wear a coat. Speed limits require a bit more awareness. Once Paul cruised down the street at 40, which is what the sign read, was stopped by the local police, and ticketed…in kilometers, he was going about 55. Currency is never a problem. The Canadian towns near the river willingly accept U.S. dollars. We opened a bank account in Gananoque just in case we ever need Canadian cash fast. And Paul has a two-sided wallet…he carries U.S. cash on one side and Canadian on the other.

Grandparent routines vary as much as the grandchildren to whom they are connected. Like us, many retirees have relocated near their grandchildren.  I admire my friends who successfully maintain a long distance relationship with their grandchildren. They Skype, alternate holidays, pack, travel, and stay in spare rooms. Some live so far, they must fly for visits. Long-distance grandparents enjoy the exhilaration of the arrival, but the sadness of good-bye. Other friends have three sets of grandchildren. Their schedules must look like a playoff bracket. My generation has taken grand-parenting to a new level; we even choose our own grandparent names. Even more, we consult with our children before making our own plans. Lately, grandparent responsibilities arise as the biggest obstacle to scheduling girlfriend-trips, more than our jobs ever did. How great to be needed.

Paul and I made it to the ice rink with time to spare. The girls skated flawlessly. I’m grateful for the freedom to cross an international border to see my grandchildren.  Should my most irrational fear come to pass, that the U. S. – Canadian border closes, I will run the blockade by boat to reach Canada. 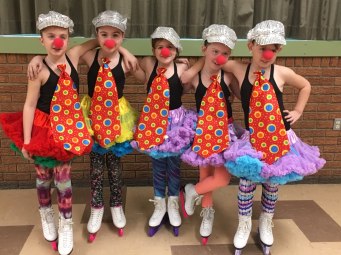 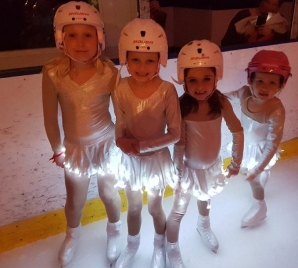